The Yuma Hamfest allows RVers and tent campers to be right in the middle of the action. You will be able to park within a few hundred feet of the main Theater Building. You can "tailgate" right outside the door of your motorhome or fifth wheel if you prefer. See the Fees page for information on camping rates. And you can even bring your dog with you.

Yuma is a mecca for Winter Visitors (Snowbirds) during the winter months. February is the peak month, and empty spaces in area RV parks are at a premium at that time. Some winters there have been as many as 80,000 to 90,000 visitors, and local RV facilities are often nearly full. However, the Yuma Hamfest takes over the entire Yuma County Fairgrounds during our event and we can offer 40 acres of dry camping to those who want it.

The fairgrounds camping area is mostly grass. Since hams are generally a gregarious bunch, most campers prefer to stay in the lawn area near the main Theater Building. For those who prefer more privacy, we can place you in a separate part of the Fairgrounds that offers a little more seclusion. All of these areas are dry camping only. Tent camping is also allowed. Because of our contractual arrangement with the Fairgrounds, tent camping is the same price as RV camping.

Unfortunately, the fairgrounds was never designed to be an RV park. There is water and electric scattered around, but as luck would have it, often not in the same location. Under the large covered canopy (see photo below), there is water and electric on each pole. Some campers may want to be here just for the shade (the Yuma sun often gets pretty hot, even in February). 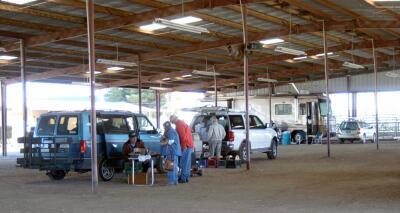 Though there are a few permanent 30A and 50A electrical pedestals on the fairgrounds, plan on only having a standard 20A outlet. Once again, the fairgrounds was never designed to be an RV park. The fairgrounds provides us with a number of temporary 20A connections, but you will almost certainly need a good extension cord. It is highly recommended that you have the necessary adapters to use either 20A, 30A or 50A electrical receptacles, as you should anyway if you do much RV camping. Generators are allowed, though we ask that you be courteous to your fellow campers and respect the usual sleeping hours. City water taps are available throughout the Fairgrounds.

There are no spaces with sewer hookups. However there is a sewer dump available right on the Fairgrounds when you're ready to leave. Shower facilities are also available on the Fairgrounds. Check the Tailgating / Camping Layout for a layout of the fairgrounds (note the camping spaces in blue). Please remember tailgaters and/or campers still have to pay admission.