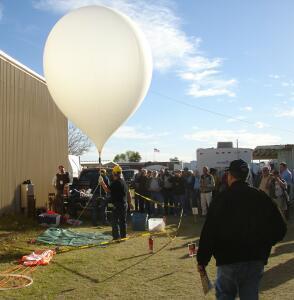 The Yuma Hamfest has participated in a near space balloon launch since 2012, depending on jet stream conditions. That first year, the balloonhad to be launched from an alternate location because of winds, while in 2013 and 2014 the jet stream cooperated and the launch team was able to release the balloon from the Yuma County fairgrounds. The jet stream models made the release of a balloon very risky anywhere near Yuma in 2015, so that launch was "scrubbed." The 2016 launch had an interesting problem with the recovery parachute and the payload hit the ground at approximately 50 miles per hour. The 2017 launch was also scrubbed because of bad wind conditions. The 2018 balloon launch was successful. Successful launches have provided live video feeds from the balloon and APRS tracking information displayed at the fairgrounds during the entire flight of the balloons.

The launch in 2012 was featured in the November 2013 issue of QST magazine. A four-page article beginning on page 30 of that issue described the use of a slow scan television (SSTV) beacon as part of the payload, and the complexities involved in transmitting pictures from as high as 88,000 feet. The article, by Gary Miller (K7GGG), describes the construction techniques used to link a digital camera to a small UHF transmitter to send images back to earth, where they were displayed "live" along with APRS tracking data on a map display. If anything, subsequent launches were slightly more sophisticated, with an improved tracking antenna designed by one of the Yuma Hamfest's board members.

For 2022, we will try it again. If the prevailing winds and launch conditions are favorable, a "near space" balloon will be launched by Arizona Near Space Research (ANSR) at approximately 9:00 a.m. on Saturday at the Yuma Hamfest. More information to come as we get closer to the event.

What is launched consists of a balloon, a recovery parachute, and the payload packages. The balloon includes an amateur radio transmitter that permits tracking of the flight to its landing and recovery using an Automatic Position Reporting System (APRS) tracker which transmits the balloon's position from GPS signals. The photo at the left was taken from a balloon at 84,000 feet.

The launch will be an example of Amateur Radio High Altitude Ballooning (ARHAB), using amateur radio and weather balloons for high-altitude research. Near space is that region of the atmosphere above 60,000 feet but below the accepted altitude of space, 328,000 feet. Near space is far more like earth orbit than the surface of the earth, where air pressure reaches 99% of a vacuum and air temperatures drop to -60°F or colder. Cosmic radiation is over 100 times greater than at sea level. Research in these conditions is done by college students, and the balloon launched at the hamfest usually carries a number of student payload packages.

Arizona Near Space Research (ANSR) is a non-profit organization which has launched more than 100 balloons so far. The balloons go very high (the highest was over 22 miles) to the edge of space. The helium-filled balloon is about 15 feet in diameter on the ground, but swells to about 60 feet in the very low pressure of near space, and it eventually bursts. With the attached parachute, the payload package returns to earth; the whole process only takes two to three hours. Amateur radio operators with APRS track the downwind path of the balloon and drive to its landing site and recover the payload packages. Students later analyze the data captured by their particular payload and use it in their research. The balloon is also equipped with a 70cm/2m cross-band repeater during its flight.

Balloon launches are scheduled to coincide with college semester schedules and good weather; not many occur during the winter. The Yuma Amateur Radio Hamfest Organization funds the launch from our event.

On Friday before the launch, ANSR volunteers will provide a briefing on the balloon launch and a seminar presentation about their mission and previous launches. Following the launch on Saturday, a computer and display at the Yuma Hamfest will be setup at the hamfest for live monitoring of the balloon flight progress and tracking the path of the balloon. You are free to stop by and monitor its progress.

The launch will take place about 9:00 a.m. on Saturday at the Yuma Hamfest, weather permitting. If the prevailing winds are not right, e.g., upper winds which could cause the balloon to take a path over the Barry Goldwater range or into Mexico, then the launch will either be scrubbed or repositioned to an alternate location. The exact time of the launch will be determined by winds, air traffic and is coordinated with the nearby MCAS Yuma control tower.

The balloon typically carries student-built payloads from Embry-Riddle Aeronautical University or other Arizona colleges and universities, including Yuma's Arizona Western College. The payloads often contain scientific equipment such as temperature and pressure sensors, cameras, and a Geiger Counter. Other payloads will include two APRS beacons and a cross-band repeater. The cross-band repeater will operate with an input frequency of 145.56 MHz with a 162.2 Hz tone, and an output of 445.525 MHz. While contacts (especially DX) are welcome, please give priority to chase team members.

APRS Beacons will transmit position information on 144.34 MHz (KA7NSR-12 and KA7NSR-14) and 445.925 MHz (KA7NSR-13). A mobile cross-band Digipeater will repeat the beacon data to the 144.390 MHz standard APRS frequency locally and subsequently will be I-GATED to the Internet for out-of-area trackers. Callsign information will be provided prior to the flight for following on www.aprs.fi and www.findu.com.

The expected burst altitude of the balloon is 85,000-90,000 feet or more. The flight is anticipated to last about 2 to 2.5 hours from launch to touchdown.