Yuma is located in the Sonoran Desert of southwestern Arizona about half way between San Diego and Phoenix, and you can be here from either in under three hours. Yuma is located along Interstate 8 and is situated on the eastern bank of the Colorado River. Did you know that more people are moving to Yuma than almost anywhere in the country? Though Yuma still has the feel of a small city, it is the third fastest growing area in the United States. Inc Magazine named Yuma the number one city in the United States for entrepreneurs in its May 1, 2006 issue. In March 2008 Forbes ranked Yuma among the top 10 up-and-coming tech cities in the nation. Now all of these people can't be wrong! Both its climate and location along the river make Yuma a popular tourist haven in both winter and summer, especially for snowbirds and water enthusiasts.

Yuma has the dubious distinction of being the hottest city in the United States, based both on the normal daily maximum temperature (88.5º F) and the highest recorded temperature (124º F). But the winters here are wonderful. While much of the rest of the country is shoveling snow and scraping ice off their windshields, Yuma residents enjoy temperatures in the 60's and 70's. Based on data from the National Climatic Data Center regarding the percentage of possible sunshine that a city receives each year, the sunniest city in the United States is Yuma, which receives 90% of its possible sunshine. The Yuma Hamfest is held in February, when the average high temperature is 75º. 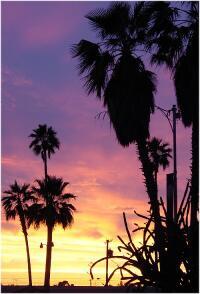 Located at the point where the Gila and Colorado Rivers converge, Yuma originated as a major transportation hub as goods came from the west coast and were shipped up river. Since prehistoric times, Yuma has been the best site for crossing the Colorado River. Spanish conquistadors traveled this route in the 1500's and the Ocean to Ocean bridge was constructed here in 1920, linking the Eastern U.S. and the West Coast. Some of the major attractions in Yuma County are the historic Territorial Prison and the Yuma Crossing Historic Park. Oh, yeah, we also have some of the most beautiful sunsets in the world!

Yuma's recorded history began in 1540 when Spanish explorer Hernando de Alarcón, became the first European to see the site of present-day Yuma. In 1701, Father Eusebio Francisco Kino was the first to recognize the Yuma Crossing as a gateway to California. A century later, Father Francisco Garcés used the Yuma Crossing in his quest for a land route to California, leading Juan Bautista de Anza and his pioneering expedition across in 1774, on their way to the first successful land route to the California coast. Garces founded 2 missions at the crossing in 1779, but they were destroyed and Garces was killed during the last major Indian uprising a few years later.

Fifty years later, the area was rediscovered by Kit Carson and finally became a permanent colony in the 1850's, when Yuma became the major river crossing for the California gold seekers.

From 1540 to 1854, Yuma was under the flags of Spain and Mexico, but in 1854 became a territorial possession of the United States through the Gadsden Purchase. In its early years, Yuma was identified by several names. From 1854 until 1858, Yuma was known as Colorado City; from 1858 until 1873, it was named Arizona City. Yuma received its present name by the Territorial Legislature in 1873.

After the construction of Fort Yuma on the western bank of the Colorado River in 1850, a town soon sprang up across the river which was the home of families whose occupations were tied to the army post. From the 1850's through the 1870's, steamboats on the Colorado River transported passengers and goods to various mines, military outposts in the area, and served the port of Yuma. For many years, Yuma served as the gateway to the new western territory of California, which brought thousands from around the world in search of gold, or those who had it. In 1870, the Southern Pacific Railroad bridged the river. Yuma became a hub for the railroad and was selected as the county seat in 1871.

After the closing of the fort in 1883, the town continued to grow because of the establishment of the Arizona Territorial Prison in its midst and mining in the nearby mountains. The prison was eventually moved to Florence, and the mining boom ended, but Yuma continued to flourish when dams were constructed on the Colorado River to store water for agricultural use.